Welcome to the community that reward users who create and share impactful contents, get on board by creating an account today!

A COMMENDATION OR A CRITICISM?

If you are being criticized often, you need to check yourself. Yes, there is a need for self-assessment.

You need to stop viewing all criticism you receive in a bad way.

We are surrounded by different people and they are not only walking with us but they are watching every bit of characters we execute. Some of these people are our intimate friends, casual friends, neighbors, co-workers, and peer groups.
Character is something that cannot be hidden forever no matter how conscious we are, one day, people will get to meet the real you.

There's an adage that says "Character is like a smoke, it can't be covered forever, it will evaporate someday.

When you notice some bad traits in you, it is better to quickly work on them.
No perfect creature on earth but that shouldn't be a license to ignore self-development.

Criticism is not bad, it is a pointer to a road that needs reconstruction.

Not everyone will be able to talk politely when they notice a wrong attitude in you, but their intention may not be to condemn you but to call your attention to an area that needs to be worked on.

Yes! I sometimes understand that the flesh wants to react but self-control should be applied when such criticism arises and when you are left alone, be truthful to yourself, and be subjected to self-discipline.
It's unwise to take criticism as an avenue to hate the person through which we are criticized. Some of what flaws that people notice in us are also what we've known to be and it's better to work on them.

Also, not all are meant for self-development and that is why you can ignore the ones that are untrue to you.

When you have a good character, everyone will not be complaining about what you do. When you get more criticism than applause from people, check yourself and adjust.

Adjustment is what brings growth. Sometimes, your attention might have been drawn close but because you choose to ignore it, it becomes what people see in you.


Don't throw all critics in the trash can cause may be helpful for self-development. When you get it often, look for a way out and seek help.

When you do it right, it will begin to fall in place in the eyes of the people around you. 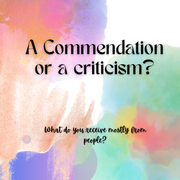